Wrapping My Head Around Gary Lutz: Covering Partial List of People to Bleach

I was recently asked to do the cover for Gary Lutz' new chapbook, Partial List of People to Bleach, that is out now from Kevin Sampsell’s Future Tense Books. I couldn’t think of any author or press I’d be more honored to do a cover for.

When I do a cover, I always like to get pretty absorbed with the text (how could you not?!), so of course I asked to have a sneak peak. I printed it up (it clocks in at some 56 pages) and read it one night last month. I had to. It had sunk it's teeth in and wouldn't let me do anything else. For that matter it wouldn't let me sit either, so I had to lay down on the couch. Eventually I ended up puddled on the floor, as I was overcome with vertigo, which I've never experienced before, especially whilst laying down, except maybe when reading Lutz' earlier books. I've always wondered where such euphemisms like "floored by," come from. Now I know.

These stories in particular deal prominently with beings that are out of whack, uneven, off kilter. Emotions have substantival qualities that ooze and puddle, reforming, reshaping. But it's the sentences that have their way with you, punching you in the gut, keeling you over and over, and hitting you again while you're down. As an aspiring writer, you are left with the feeling that you may as well throw in the towel and bow down as no one can ever match the relentless stream of epiphanic sentences that Lutz can deliver. As a reader, I was rendered into a naked ball of putty, overwhelmed by the every day things like gravity and incapable of speaking for days. And I had to make a cover that was worthy?

Having never taken an English or grammar class, I can't say what makes his writing so effective. Having an academic background in physics, I tend to deconstruct things into their indivisible components, to think in terms of action and reaction. Words are the atomic particles of language, which is what we use to try to render our personal realities. Sentences are the devised interactions between these indivisible words that collide with each other to synthesize ever-complex and at times non-linear, unpredictable relationships.

The characters that Lutz creates with these atomic words also act on this quantum level, in self-similar fashion. Without other characters, they have no identities, no one to witness or interact with, or to validate themselves. They plod along in non-descript suburban universes, colliding, interacting, repelling or attracting. "Looking for action," as they say. You could say the characters are sexually charged, but not in ways we'd normally think of sexuality. Gender is irrelevant to Lutz. Men collide with men, men collide with women, women collide with women. Everyone is reaching out in desperation trying to connect, form a bond, to have an interaction, to create something bigger than their minute ionic selves. In this way, Lutz' sentences and characters, and consequential "stories" are like those snaking lines in bubble chambers that plumb the guts of our beings to reveal revelatory truths.

Anyway, here's what I came up with for the cover. Nothing is worthy of covering such a work. This is something you need to get your fingers and eyes inside of for yourself. People shouldn't have to be the one to tell you. 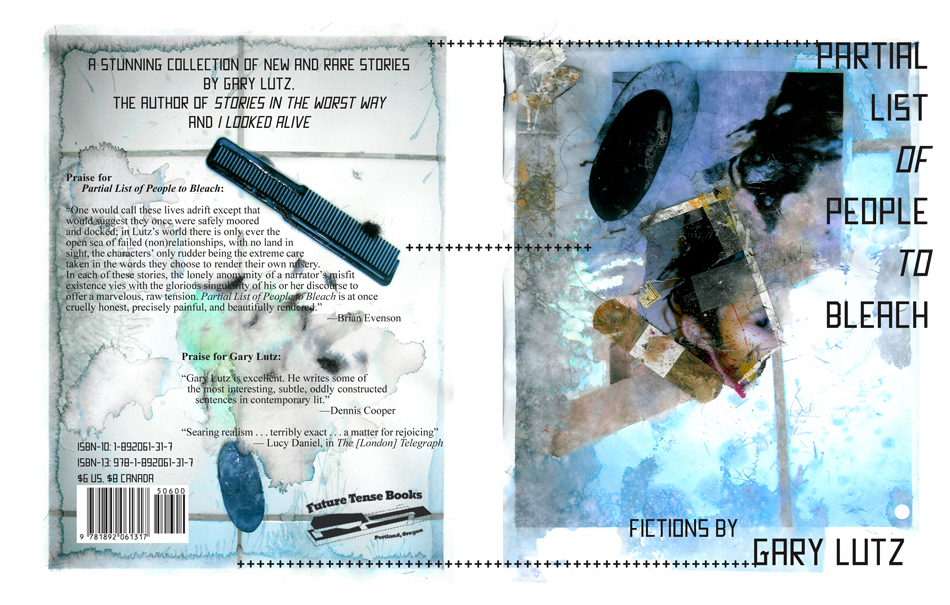