Emissions from the Cosmogonic Ether }

I first met Michael Peters in Miami at a Vispo exhibit we were both in a few years back. We had come from a tour of the Sackner Archive and somehow he landed in the backseat of a rental car I was driving, trying to navigate our way around Miami. When you first meet Michael Peters, he has this penetrating stare and intensity that can be unsettling or intimidating, especially given his towering stature (looking back at the pics from Miami, that's him standing next to Marvin Sackner, intently observing). He has this unbridled and contagious enthusiasm for almost everything under the sun, sometimes it's a childlike curiousity, sometimes it's mad-scientific, relentlessly focused on peeling back skin to discover how it all works. Once, after spending an entire weekend with him, I called him a vampire because he had sapped the energy out of me and rendered me skinless and mute. It was meant as a compliment, and given his Eastern European roots, it's possible he has vampire blood in him. The weekend in question was at the Lake Forest &Now Festival. The following is a video from there of Michael Peters performing some pieces from Vaast B1n (at the time I think he was calling it n Emphemerisi) }

Not only is Michael Peters a vampire and a talented poet and visual artist, but he is an insanely gifted guitar player and singer, who with his wife Sandra Gardner are Poem Rocket. And not only can he hold his own within these separate mediums, way beyond tinkering, but he is comfortable enough within them to be able to merge and blur the boundaries between them, creating uniquely resonating language/art forms. There's poetry in Poem Rocket and there's music in his poetry, and visual imagery both implied and direct. Straight-up "poetry" usually rubs me the wrong way, but I'm not sure I would call what Michael Peters does poetry. It's more like primordial code, a dense viscerating lexicon, a raw machine language that requires no editorial filter or translation, that oozes organic goo. Here is something straight from the horse's mouth }

—that arrival that occurs in

a phys.—in in stacked lemmas

—a phys inside the in, the bin of itself

but a vaaster mode of its waiting

idle by its empty self

idle, sav’d by its very induction

a rung behind escape frequencies

devising emissions to know the where

and in the isolation of its æffects

quenching the path of its absence

by accelerating the wherewithal within

the plume of emptiness— is

becomes all absence in a dazzling attraction

and that extraction of the mutend probe—

is that wherever, where both are possible

Like the blackbody radiator that he references, these Vaast B1n objects absorb all radiation that impinge upon it (the raw data that Peters' puts into it) and re-radiate an energy that is characteristic only of the radiating body (the poem object or Peters himself). This spectral pattern is completely unique to Michael Peters. It is his DNA translated into coded language and re-radiated for our detectors (eyes and ears) to absorb. Supporting the primal poem objects are drawings penned by Michael Peters, that compliment the text objects (or the text objects compliment the image objects, either way). Here's an example of an image from Vaast B1n, of a mutend probe also referenced above } 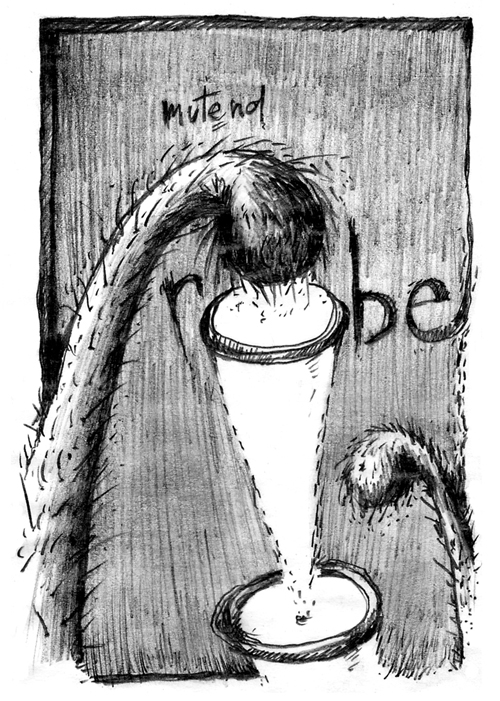 This "mutend probe" is autobiographical of Michael Peters himself, or at least is an accurate image that represents his bristled, intense curiousity. Though there's also some of him in the dark horses and storm petrels that abound. Here's a few more samplings from Vaast B1n that speak for themselves }

in the serifed O of the VU meter

in the shadows of the forest

in these notations—the plea of assuredness

the plea sure of its Rhiemann integrals

that in, in any way we please

as the finite parts, a needle—

numbing the pleasure in zero, inside that O

is the known <none> that I am dying about now

the winged beaks of petrels writing this so lightly

an all that’s forswounden—   listening to its sounds

and not what its what means

but it’s decay, the movement in through the O set

therein—  in the darkness of the forest

then and therein I am going to myself

as a meter of me & my other self

an offing—  which cuts a  nother’s white space

I traipsing the blk tundra in midnight auroras

always, the immediate—  that to which

dying in tones against that all more completely—

the answer that cannot ask itself

If you're chomping at the bit, here's another that I published in Sleepingfish0.75. In all there are some 80 text objects and 20 images that make up Vaast B1n. Then came the task of covering this vast and wild bin. What image to afix to the outside covering that reprents the whole and also anoints it as Calamari? The image that came to my mind, perhaps because at the time I was fresh back from a trip to Morocco, was an underground cistern we saw in El Jadida. Jess took the underlying photo, before I gave it an etching acid wash, and overlayed some of the images you might recognize from above } 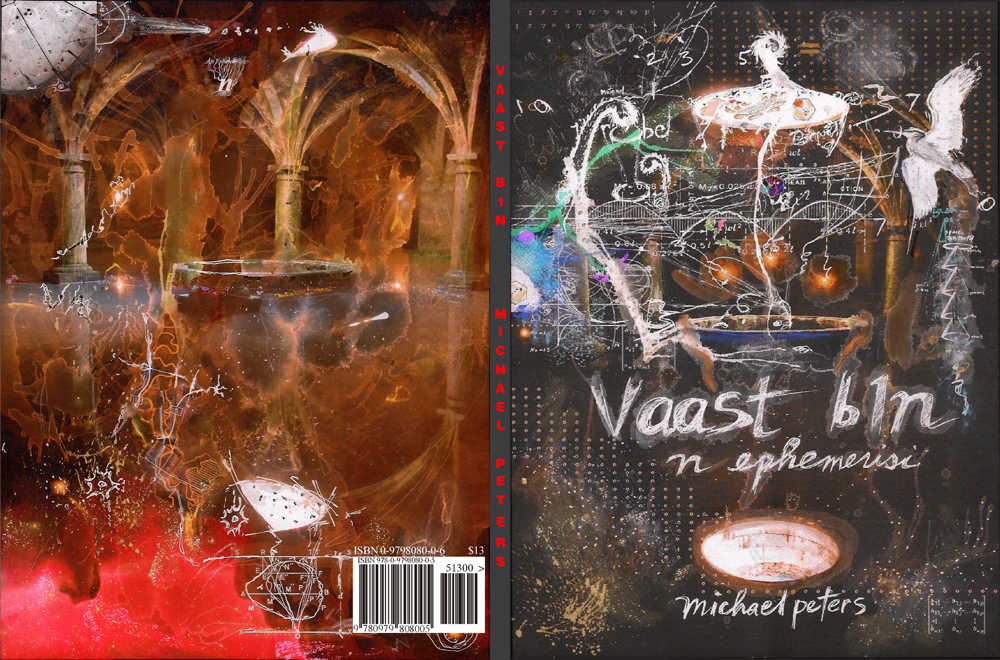