The Combinatorics of Advertising: TELLTHISMUCH by Carlos Luis & Wendy Sorin

I was delighted to receive a new chapbook in the mail the other day, a collaboration between Carlos Luis & Wendy Sorin entitled TELLTHISMUCH (The Runaway Spoon Press). Being that I have previously collaborated with both of them before, I was personally interested to see how their collaboration would turn out, especially as what I admire most about both of them is their sense of visual design and physical symbolism, and I was interested to see what sort of fish they would catch when their tackle boxes were combined.

Immediately we are presented with the question, "What happens when ad makers take over all the popular myths and poetry?" From here, language dissolves to a maze of synaptic associations, physically linked and circled, giving the outward appearance of a Tom Phillips piece. But whereas Phillips steals new associations from old texts, Sorin and Luis fabricate their associations, though often from sampled or used materials—iconic pictures, found texts, headlines, symbols and other collagic ephemera—which they bounce off each other like charged pachinko balls in a dreaming brain. Rather than deconstructing, they are constructing, and combining in a wild game of chance. The meaning behind the resulting juggernaut is about as apparent as the underlying themes in advertising which they address, in that the jungle of symbolism triggers connections in your brain which you might not even be aware of. Case in point, in this piece we are given veritable eye candy with the repeated disclaimer: "maltreat, his own eyes": 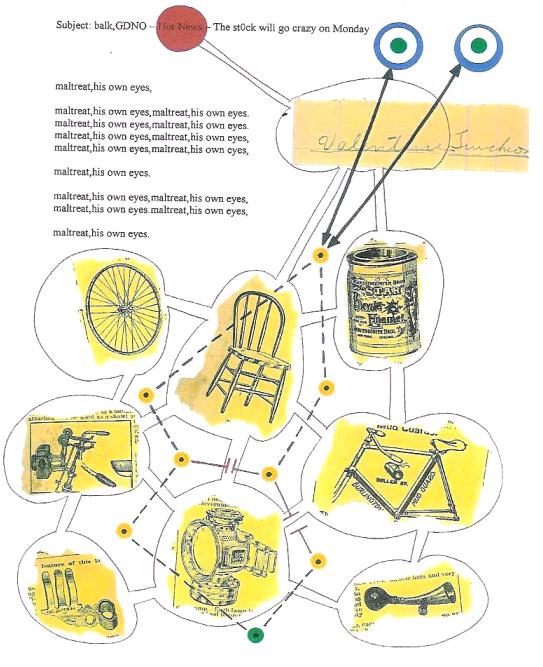 This combinatoric or nodal styling is not new to Sorin (see some of the samples from our collaboration P.S. At Least We Died Trying...), but when combined with Luis' compounding lexicon—half-borrowed from ancient hieroglyphics and half-borrowed from the depths of ASCII assembly code symbols that don't normally make the rounds in conventional "texts", they form something entirely different and compelling. I'm not sure what the image towards the middle of the chapbook is intended to be (see below), but to me it looks like the exposed guts of a distributor cap, which is solidified by the repeated rearrangement of the letters P-L-U-G: 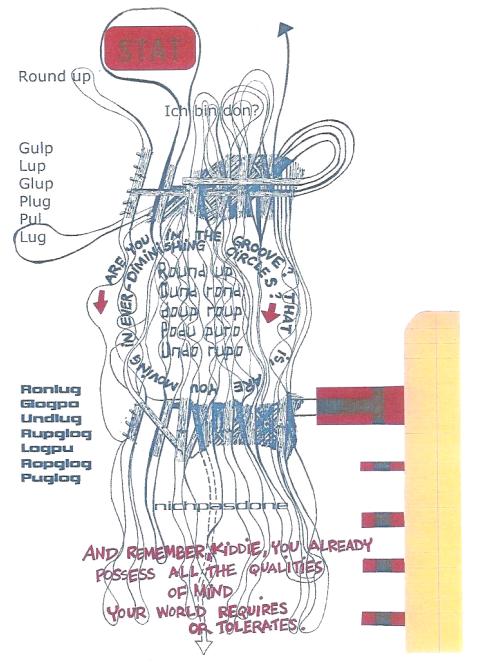 As well as the recurring STAT red warning label, which not only conjures static, or statistic, but STET, the copyeditors code for "let stand" (in reference to an omitted or corrected word). The viscerally electric, yet eerily biological, image of a distributor cap is perfect for picturing how the synaptic "language" itself works. The distributor cap in a motor is what makes the connections, shooting current out to the individual spark plugs which in turn fire their respective pistons, bridging the gap from ethereal and invisible electrical energy, to physical mechanical energy. Not that you need to know this to drive a car. These are not things you are subconsciously aware of. So what is TELLTHISMUCH? It is a subversive advertisement for the loco-motion of language itself, the crazed propagation of dissociated ideas into the interstitial fabric of our gray matter to fuse and drip back together into new and novel language formations. And did I mention that it accomplishes this while still being light-hearted and at times funny?

Also new from Carlos Luis, are two fantastic Traptexts, 8-page chaps dense with Luis' wild and symphonic machine language, as Geof Huth perfectly states: "Macaronic Beauty of Black and White."  No excuse for not checking these out, as they are FREE, while they last, from Jukka-Pekka Kervinen's eIghT-paGE pREss. And of course, I wouldn't miss an opportunity to PLUG (there's that word again) the forthcoming collaboration by me and Carlos entitled ma(I)ze Tassel Retrazos, though it is not quite available for public consumption. Some of Carlos' images from that collaboration can be viewed in the SleepingFish 0.75 webbed feature, or in Tarpaulin Sky V2N4, or in the forthcoming Post Road 11.

To get TELLTHISMUCH (ISBN 57141-071-6), you probably want to contact the publisher Bob Grumman directly at: